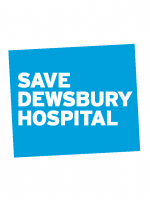 The plans to downgrade DDH, including the reduction of our A&E and maternity services and a 69% reduction in the number of beds, have been approved by the Health Secretary Jeremy Hunt.

That’s despite 33,000 people round here signing a petition against these proposals.

That’s despite major concerns expressed by the Joint Scrutiny Board, the Council body that’s in charge of looking at these kinds of plans.

And that’s despite growing concerns that Pinderfields is struggling to cope with the current level of patient demand, and will struggle even more when more Dewsbury patients are sent there.

The downgrade of A&E at Dewsbury will see an estimated 20,000 additional patients per year at Pinderfields. But in the last two years, Pinderfields A&E was closed to new patients on over 140 occasions. I’m still not satisfied that there is an answer to this problem. Where will patients go if Pinderfields can’t cope?

People round here are very distressed at what might happen if they become ill.  On Saturday, I spoke to Christine in Thornhill, who was an inpatient in DDH in January this year. The fire alarm went off but because there were no beds available at Pinderfields, patients had to lie in their beds, in the hospital corridor, for 7 hours until the ward was deemed safe.

This is an appalling situation reminiscent of the worst days of Tory mismanagement of the Health service in the 80s and 90s. Labour ended this kind of thing after 1997 but we’re seeing it again now.

Like a lot of people I’ve spoken to, I’m not convinced by the Care Closer to Home proposals. Patients being treated at home and spending less time in hospital is obviously a good thing. It frees up beds and saves money. We should all support that idea. But as a healthcare worker with over ten years’ experience, I’ve seen these kinds of proposals put forward again and again, and it hasn’t worked so far. I’ve seen nothing this time to reassure me that it will work now. And if it doesn’t and we reduce the number of beds when usage of the health system is going up, that could spell disaster.

Local health bosses are in a difficult financial position. Local commissioners have had £30m taken from their budgets to pay for the NHS reorganisation that nobody wanted; that David Cameron promised wouldn’t happen.

It’s impossible for the NHS to maintain services at the current level with this degree of cuts.

I support the repeal of the Health and Social Care Act that Labour has committed to if we win power including repealing Clause 119, which was voted through last week by the Tories including Simon Reevell, allowing hospitals to be closed without any public consultation whatsoever. Furthermore, I’ll push for the full renationalisation of the privatised services that have been sold off since the last General Election, and for proper investment in our NHS that takes into account the rise in patient demand and inflation.

People round here deserve better. And that’s why I’ll not only continue to fight these proposals (unlike Simon Reevell) who supports them even when all other local MP’s are opposed and even local Tories refuse to back them, I’ll continue to campaign tirelessly for a better deal for our health service.