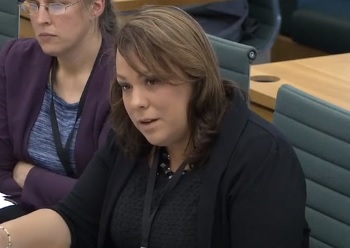 Dewsbury MP Paula Sherriff addressed the board of the Mid Yorkshire Hospital Trust on Thursday morning regarding the implementation of parking charges for disabled blue badge holders.

Sherriff, who sits on the Health Select Committee in parliament, launched a campaign against the proposed charges in July when the changes were first announced.

Addressing the board, Sherriff said she that she wanted to work with them and appreciated that they needed to make tough decisions, however she was immovable on her position on charging for disabled parking, saying:

“Whilst there are many users of the hospital that have been hit hard by the recent rise in parking charges, I feel it is the blue badge holders who will suffer the most.  Able bodied patients have the option of walking or using public transport, many disabled patients do not have this choice and can only access their appointments by car.  There is also an increased likelihood they are going to need to access the hospital services more frequently. These charges have a huge impact on the lives of people who are already suffering at the hands of their disabilities.

“One of my constituents contacted me distraught. Her and her husband are both pensioners and her husband is on many medications and has to attend Dewsbury Hospital weekly for blood tests. He has said he will not go to the hospital any more due to the charges being unaffordable. Obviously this is extremely worrying and she simply doesn’t know where to turn with this issue.

“Is this a unique case though? How many patients are missing appointments following the implementation of the new charges? Have DNA’s increased in the recent weeks?”

The Chair of Trust, Jules Preston admitted they had not considered missed appointments (DNA’S) as part of the parking charges and agreed the trust would look into monitoring the impact.

Sherriff challenged the trust on the spending of £15million on management consultants Ernst Young in recent years. Spending which was defended by the Finance Director as value for money. Sherriff responded that as Finance Director he had an ‘ulterior motive’.

“When I was invited to speak to the board today I was under the illusion that the decision on blue badge parking charges was going to be reviewed. It came as a surprise to me when I was advised by the Chief Executive, Stephen Eames that this was not the case. It was certainly what he led me to believe at our meeting in September.

“I am however pleased that they are to monitor the impact of DNA’s as a result of the charges if not slightly surprised that this was never considered at the time. I await with interest the results from any research carried out and, as I said in the meeting, I will not let this issue drop. I have many constituents that this is causing great distress to and my priorities lie with them”