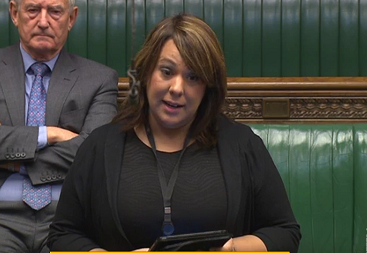 Dewsbury MP Paula Sherriff yesterday made a passionate speech attacking the government on their proposed cuts to tax credits.

The cuts will affect up to 13,000 children in Dewsbury & Mirfield whose families are currently receiving tax credits and are estimated to leave up to three million families nationwide worse off, with the average loss of £1300 per year.

Her opening lines were aimed at the privileged backgrounds of some on the government benches:

“I look at today’s debate as someone -; perhaps unlike some of the Members opposite who have spoken -; who did an ordinary job on an ordinary wage before I came to this House.”

She then went on to talk about her former work colleagues and constituents who stand to lose out through the government cuts:

“Many of the people I worked alongside in the NHS relied on tax credits to make work pay, and now find themselves caught in a pincer between the government’s pay cuts and the work penalty.

“There are more than thirteen thousand children in my constituency who are in families supported by tax credits. That is over two thirds of all families with children in Dewsbury and Mirfield.

“Literally thousands of the people I represent, now fearful for their future.”

The vote saw a victory for the government despite many of their own MP’s voicing concern over the cuts.

“Despite many Labour MPs making passionate speeches in this debate, I am devastated that we lost the vote. But the fight will carry on, I will never give up standing up for the people in my constituency. I’m Labour; it’s what we do.”