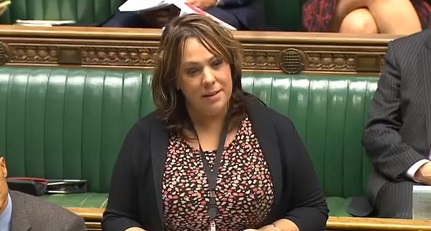 It has been a pleasure to listen to so many speeches today that show what trade unions really are. Not the ridiculous stereotype of trade union barons or militants but the millions of ordinary working people who elect their leaders and simply want a better, fairer, life at work.

I must declare an interest in this debate.

I am a proud trade union member.

I was a shop steward.

And yes, I have been on strike.

And I was supported by my fellow trade unionists in all of those, and in getting to this place as well.

And I’ll tell you something, I’m proud of all those things.

I’m proud to stand shoulder to shoulder with fellow working people to get a better deal for people who slog their guts out just to get by and get on.

I was proud to represent fellow members when they had a problem at work, making sure they knew their rights and got access to justice when they were wronged. And of course that meant standing up to unscrupulous bosses. But often it meant fewer days lost to sickness, happier staff and lower turnover, and productive negotiations when an issue came up.

And yes, I was proud to stand on a picket line with REMPLOY workers shamefully abandoned by the last government and with low paid women workers fighting against downgrade. As a trade unionist, I knew it was a last resort, not one any of us wanted to take, but when all else fails, that’s what is left. And without it, the bad bosses don’t want to negotiate in the first place. Quite simply, it allows working people to have some power over their lives.

Throughout our history working people have had to fight for what we’ve got. Nothing has ever been gifted to us.

Trade unionists fought for an end to child labour, an 8 hour day, paid annual leave, maternity and paternity pay, universal education, a minimum wage and yes, even the weekend.

Key to that was an organised voice in politics.

It is no secret that the affiliated trade unions support many of us on these benches, while those opposite rely on big businesses, corporations and wealthy individuals.

And for decades there has been consensus that any changes to political funding rules should be done on a cross party basis.

This Bill, like so many others, rips up the constitution for a naked political attack – an attack on the ability of trade unions and their members to have a say in politics, just at the time when it has never been more important that working people have a voice.

At the moment hundreds of thousands of working people pay a few pence from their union subs to make their voices heard -; paramedics or cleaners who don’t have the luxury of a cosydinner with the chancellor; supermarket workers who won’t catch the Secretary of State on the veg aisle and teaching assistants who aren’t likely to bump into the Prime Minister on the street. And indeed the last time someone did bump into the PM in West Yorkshire, it didn’t end that well!

Trade union members know if their unions are affiliated to Labour and we can opt out of making a contribution to the political fund.

And every 10 years we are balloted as to whether they want a political fund at all.

There is no real wrong that this Bill is trying to right. It is not about high principle, just low politics.

Madam Deputy Speaker, I am not afraid to say that I am a working class woman when there are too few in this House. I spent my life before I came here working on the front line of our services,for the police supporting victims of crime and for our NHSsupporting all who needed care. When I walk round my constituency time and again people say that they want to see more people ‘like them’ in parliament.

So I am not ashamed of trade unions’ political work -; they are a part of our democracy, not a barrier to it.

Working people in my constituency need a voice more than ever. This government would rather silence us than listen, but I for one will never stop standing up and speaking out for the people I represent, and it is in that spirit that I will oppose this Bill.