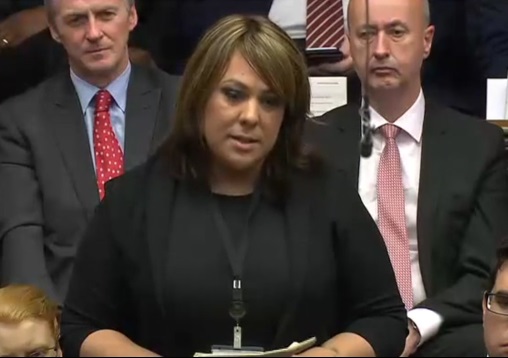 Throughout the course of the meeting they discussed the Prevent strategy, a government programme aimed at preventing people from being drawn into extremism. They also discussed working with internet service providers and tightening up on travel to Turkey and Syria as well as funding for community engagement.

Sherriff commented afterwards: “I am pleased these discussions are taking place and it is a step in the right direction. It is important though that we act and don’t just talk.”

Following the meeting Sherriff published an open letter to the Prime Minister raising concerns about his recent comments made at a speech to the Global Security Forum in Bratislava where he warned of Muslim communities ‘quietly condoning’ extremist ideology.

In the letter she raises the frustration within Muslim communities who despite condemning the actions of the extremist few are left feeling demonised. She talks about herself being the victim of threats being made by far right extremists in targeting Dewsbury and how this type of extremism must also be countered. She went on to invite the Prime Minister to visit Dewsbury:

“Having delivered this speech in Bratislava, I hope you will consider visiting Dewsbury for a genuine dialogue in which local people and their representatives can also speak for themselves rather than simply being spoken about. You could see some of the work that local Muslim community organisations are already doing and hear how the government could do more to support it.” 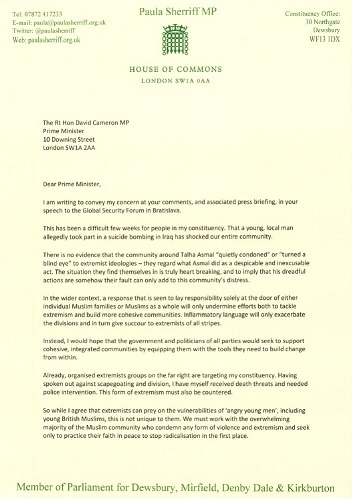 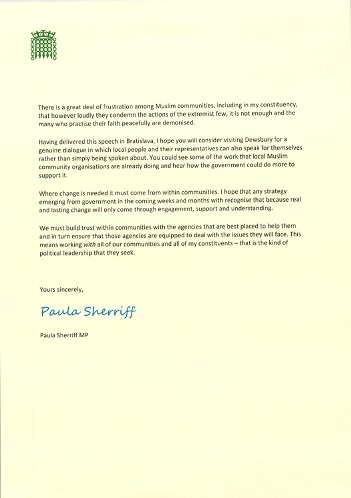