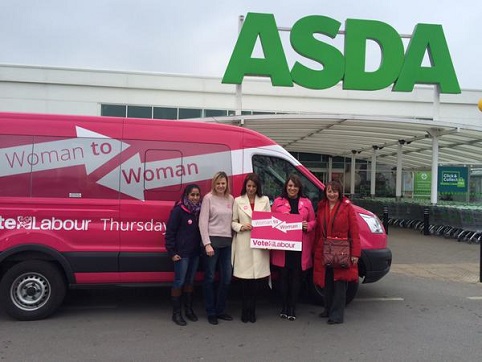 Paula Sherriff welcomed Shadow Minister for Women and Equalities Gloria De Piero and the “Woman to Woman” tour bus to Dewsbury this week, against the backdrop of damning figures highlighting the increase in long-term unemployment for young women in Yorkshire.

New analysis of ONS statistics reveals that long-term unemployment for women aged 18-24 has increased by 66% under the current government. Our constituency is particularly badly hit; in Dewsbury, the number of young women out of work a year or more has gone up an astonishing 500 per cent since 2010.

Gloria De Piero emphasised that the figures are a clear sign of the Government’s failure, and explained Labour’s pledge to provide young people with real opportunities by guaranteeing a paid job or training for all young people out of work for over a year.

The “Women to Women” tour bus visited Dewsbury Asda, where Paula and Gloria discussed a variety of issues with female store workers, including the terrible unemployment figures, the continuing cost of living crisis, and Labour’s plans to help working families with 25 hours of free childcare for 3 and 4 year olds.

“Labour’s women’s campaign is about reaching out across Britain to talk to women about the issues important in their lives, and how a Labour Government will benefit them and their families, from boosting the minimum wage, banning exploitative zero-hour contracts, to cutting small business rates and providing 25 hours free childcare for 3 and 4-year-olds of working parents.

“These figures for Dewsbury show the extent to which young women have been so badly let down by David Cameron. They have been badly neglected by the Tories, but the next Labour government will provide them with the help they need.”